Glass is one of the oldest, luxury commodities ever manufactured. Mankind has been creating decorative glass articles for millennia, at first using rudimentary molds before the characteristic blowing method was invented in the Middle East. Various major players adapted and evolved the glass manufacturing process in subsequent centuries, with translucent broadsheet and crown glass windows preceding the first clear, colorless panes. Today, manufacturers exploit a range of techniques to produce high-quality glass with a range of aesthetic and functional qualities, including selective opacity and even patterned surface etching.

Micromachining glass is not a novel concept, but it has reached new levels of maturity in recent years. The onset of high-precision laser-based etching processes has dramatically improved our ability to carefully modify challenging substrates, including hard transparent surfaces like plate glass. However, the path to small-scale surface modifications of glass has been long and complex. In this article, we will take a brief look at the history of glass micromachining. 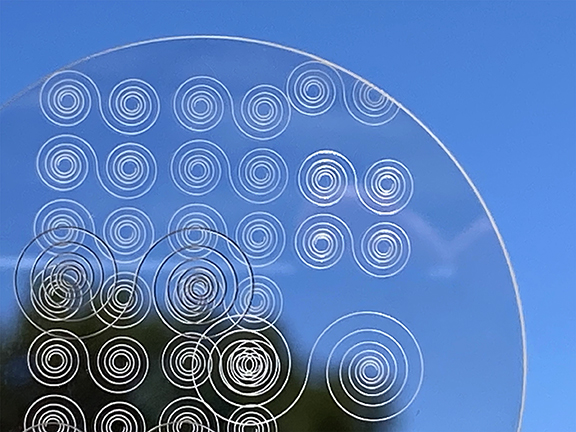 What is Etched Glass?

Etched glass is typically decorative, though the increasing precision of micromachining techniques has opened avenues into high-precision optics and signal transmission. The process varies, but the underlying principle of each technique is the same. Minute amounts of surface matter are removed from a glass pane via abrasion, caustic chemicals, or laser ablation. It was popularized in the 1800s by a process known as French Embossing.

French Embossing, also known as acid etching, was developed to impart a patterned finish on glass panes. This characteristic, frosted finish was generated using a mixture of hydrochloric and sulfuric acid – as well as mineralogical reagents – which dissolved the silica in a carefully-designed pattern. The mechanism of this dissolution reaction is determined by the adsorption of ions in the hydrofluoric solution, which breaks apart siloxane bonds in the silicate network.

Micromachining glass using caustic acids is ideal for creating intricate decorative designs, but it involves the use of highly toxic chemicals, and the process can be a slow. Sandblasting was introduced to accelerate workflows. This uses a jet of highly-pressurized abrasive media to remove surface molecules via abrasion. Initially, this process was conducted by hand, but process automation and improvements to CNC machining have enabled automation of large-scale glass sandblasting processes.

Wet etching refers to the removal of sample material via ablation, followed by chemically-assisted etching. A high-power laser illuminates the substrate surface in a pre-defined pattern before the workpiece is washed in a supplementary acid bath. Though wet etching is low cost and reliable, it is typically isotropic and limited for etches of not less than 3 micrometers (μm). Dry etching refers to the process of texturing glass using ablation alone; an anisotropic method capable of generating smaller feature sizes. However, this depends upon laser technologies capable of mitigating thermal side-effects and structural defects due to warping.

At IMRA, we specialize in the use of pioneering fiber-chirped pulse amplification (FCPA) technology, exploiting shorter lasers pulses than conventional micromachining tools like Excimer lasers and Vanadate systems. With high maximum peak intensities and pulses on the order of femtoseconds, FCPA lasers present opportunities for micromachining glass and other challenging materials with unprecedented precision.

FCPA micromachining of glass offers the greatest possible precision of any method currently available. If you would like to learn more about the process, simply contact a member of the IMRA team today with any questions.