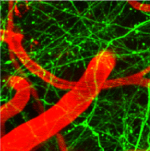 In a multiphoton fluorescence process, two or more photons are simultaneously absorbed by a molecule, which then emits a single photon at a different wavelength as it relaxes back to its ground state. A femtosecond laser is required because the probability of simultaneous absorption depends strongly on the intensity of the light. Sufficiently high intensity is only generated at the laser focus so that 3-dimensional mapping is possible without the use of a pin-hole or aperture, as with confocal microscopy. This leads to higher resolution and the ability to identify specific features with greater accuracy than single-photon confocal imaging. The ultrashort pulse duration means high peak power levels can be achieved at the sample while maintaining low average power. The low average power reduces cell toxicity and heat-related effects in the sample.