A Guide to Femtosecond Lasers

An abundance of distinct laser technologies exist today, but each type is built on early research in light-amplification by stimulated emission of radiation (laser). This ground-breaking technology is now characterized by two distinct modes of operation: continuous wave (CW), and pulsed mode. In a CW laser, the power output is consistent over time, while the optical power of pulsed lasers fluctuates at pre-defined repetition rates, and emit pulses of certain lengths. These rates refer to the laser pulse’s time domain, which may extend in pulse lengths below the picosecond range (10-12 seconds).

Manufacturers are increasingly able to engineer femtosecond lasers, which are pulsed mode instruments with pulse lengths on the order of femtoseconds (10-15). In this blog post, IMRA aims to answer all your questions about femtosecond lasers, from their development history to their current applications.

What is a Femtosecond Laser? 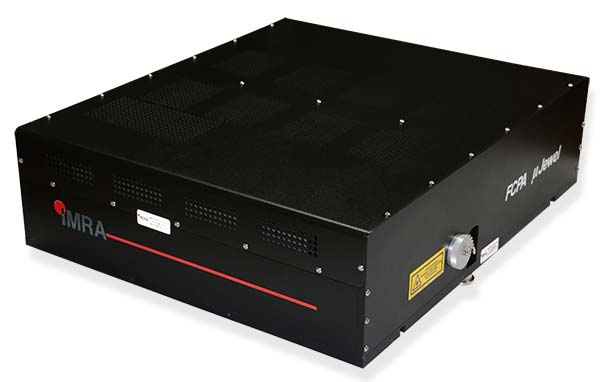 A femtosecond laser is a device that emits optical pulses of infrared (IR) laser light with durations on the femtosecond scale. Electromagnetic pulses with a duration of picoseconds or less are classified as ultrashort pulses, which typically exhibit peak powers on the order of megawatts (MW) or more and correspondingly high pulse repetition frequencies.

To achieve femtosecond laser pulses with high peak powers, it is necessary to use a form of optical amplification like chirped pulse amplification (CPA). This is a method that is used for amplifying ultrashort laser pulses and helps reach peak powers up to the order of petawatts (PW). All high power femtosecond lasers utilize some version of CPA to generate high peak power ultrashort lasers with high repetition rates.

CPA is required to control the different parameters of femtosecond lasers (such as gain, bandwidth, output spectrum, etc.). Mode-locking refers to technologies that control these laser parameters and produce high-quality intense pulses of laser light. The types of mode-locked lasers capable of producing high-intensity femtosecond pulses of light include:

Pioneering research and development (R&D) into lasers with incrementally shorter pulses yielded the most tangible results in the 1960s and ‘70s. Mode-locked dye lasers were able to generate laser pulses in the femtosecond domain, but hardware limitations rendered dye lasers insufficient for most envisioned applications of femtosecond lasers.

The invention of the titanium-sapphire (Ti:sapphire) laser in 1982 was the first true breakthrough for the commercialization of femtosecond laser technology. A mode-locked Ti:sapphire laser was integrated with CPA technology shortly after, earning the physicists responsible for this integration the Nobel Prize. Femtosecond lasers have become available using a range of gain media in the decades since, with additional amplification technologies entering the fold to increase the available pulse frequencies and wavelengths of ultrashort pulses.

Femtosecond lasers now service an extremely wide range of industries, from the biomedical sector to microscale machining. They have demonstrated outstanding potential for ultra-precise joining of difficult materials such as transparent media, including glass-to-glass welding. IMRA has provided a range of femtosecond laser solutions for applications as varied as: