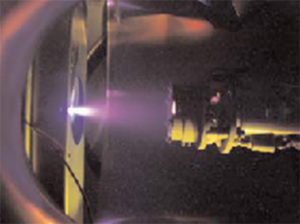 Pulsed laser deposition (PLD) is a versatile technique which has been extensively used to coat surfaces with a variety of materials, including oxides, nitrides, carbides, semiconductors, metals and even polymers. Excimer and Q-switched Nd:YAG lasers, with nanosecond pulse durations, are currently the standard for use in PLD. It has been demonstrated that PLD has significant advantages over other film deposition techniques, including simpler set-up, higher deposition rate, less contamination, and a better stoichiometric ratio in the resulting film. PLD is a subset of the broader laser material processing marketplace which has become increasingly important in industrial applications over the past two decades. In the last several years, ultrafast lasers, with pulse durations in the femtosecond and picosecond range (10-15 to 10-12 s) have shown great promise for improving the quality and reducing the scale of fine detail which can be obtained by laser micromachining. The unique ablation properties of femtosecond lasers that result in higher precision in micromachining are also beneficial for the production of uniform particulate plasmas.

Femtosecond and picosecond lasers have potential for replacing nanosecond lasers in traditional PLD applications, and their unique capabilities enable a variety of new uses in emerging fields. IMRA’s robust, reliable femtosecond fiber lasers, such as the FCPA µJewel series of products, are ideal for industrial deployment of these promising techniques. 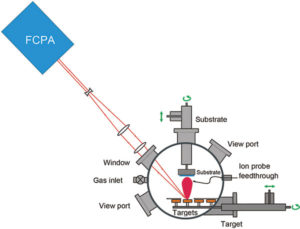 1. laser ablation to remove material from the target,
2. ejection of the material in a plasma plume,
3. deposition of the plasma material onto the substrate

The quality of the coating can be controlled by varying the deposition parameters, such as laser fluence, background gas, substrate temperature and other variables.  This laser-assisted physical method is nonselective regarding materials, and is especially suitable for those that are chemically inactive and have high melting temperatures, such as the refractive and noble metals.

Femtosecond fiber lasers have significant advantages for pulsed laser deposition processing. The high peak power and short pulse duration of the femtosecond laser pulses result in clean ablation with minimal thermal damage, shock affected zone, debris, or recast. When used as the first step of PLD, this “a-thermal” ablation process provides better results in terms of the generation of particles and coatings. 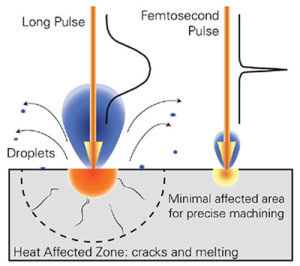 While the physical chemistry processes responsible for material removal in femtosecond laser ablation are more complex than those in nanosecond laser ablation,1 they can be more controllable and repeatable. The remarkably clean ablation properties exhibited by ultrashort laser pulses stem from the extremely high peak power and short pulse duration, which ionizes and vaporizes materials quickly before thermal effects such as heat diffusion can occur.2 The irradiated region of the target does not lose energy during the short time that the laser pulse is depositing energy in the material.  The heating is almost entirely localized at the irradiated area, lowering the threshold for ablation. The hot vaporized material is expelled away from the surface before it can heat the neighboring areas of the target material, resulting in a reduction of the heat-affected-zone (HAZ), as illustrated in Figure 3.  Less material is melted and re-fused, resulting in less recast.  Because the induced shock wave is also less intense, there is a reduction of the shock affected zone (SAZ) and less debris is scattered in the vicinity of the ablation zone.

Pulsed Laser Deposition with Transparent Materials
Because PLD starts with laser ablation of a material, it is important to note that ultrafast laser ablation works for a wide variety of materials classes, whether they be metals, ceramics, semiconductors, dielectrics, or biological materials, cells, and tissues. For most laser micromachining, ablation works best when the material is absorbing at the laser wavelength, which is why, for example, UV lasers are commonly used for machining polymers and other materials which are transparent in the visible, but absorb in the UV. With femtosecond laser pulses of high intensity, it is possible to reproducibly and precisely machine transparent materials – even materials which are transparent to the laser wavelength. Although the femtosecond laser pulse is usually in the IR (800 nm or 1060 nm typically) a transparent wavelength region for many dielectrics, the high-intensity pulses are equivalent to “UV on the target.”

This stems from nonlinear optical effects in the materials which are driven by the extremely high intensities which are generated by the femtosecond pulse. An ultrashort laser pulse having a pulse energy of Ep = 1 mJ and a duration of 1 picosecond has a peak power of Ppeak = 1 MW. When this is focused to a spot size of 5 mm, the power density reaches levels of Ipeak ~ 1012 – 1013 W/cm2.

At these intensities, multiphoton ionization strips the outer electrons from the constituent atoms of even transparent dielectric materials. This starts a cascade of avalanche ionization, leading to optical breakdown and vaporization of the material. The result is a remarkably controlled and predictable ablation threshold and removal rate.

Comparison of Laser Systems for Micromachining
Typically, Excimer and Nd:YAG lasers have been used for PLD applications because of their long history of industrial deployment. These systems have high pulse energies of     ~ 1 mJ and repetition rates of 1 – 5 kHz. For tightly focused beams, the 1 mJ pulse energy is far above the ablation threshold, and many of the advantages of pulsed laser delivery are lost.  Due to the extremely high energy input, there is an increase in thermal effects, with melting, recast, and debris generation, unless the laser intensity can be reduced to near the ablation threshold. Usually, this results in most of the laser power being attenuated and wasted. In addition, the relatively low repetition rate of these lasers does not lend itself well to direct-write micromachining techniques, which often require rapid beam scanning by galvanometers.

Fiber-based femtosecond lasers such as the IMRA FCPA mJewel provide an excellent alternative to Excimer and Nd:YAG lasers. With pulse energies of up to 10 mJ and repetition rates from 100 kHz to 5 MHz, the FCPA gives ample pulse energy for ablation of most materials and a sufficiently high repetition rate for direct-write applications. 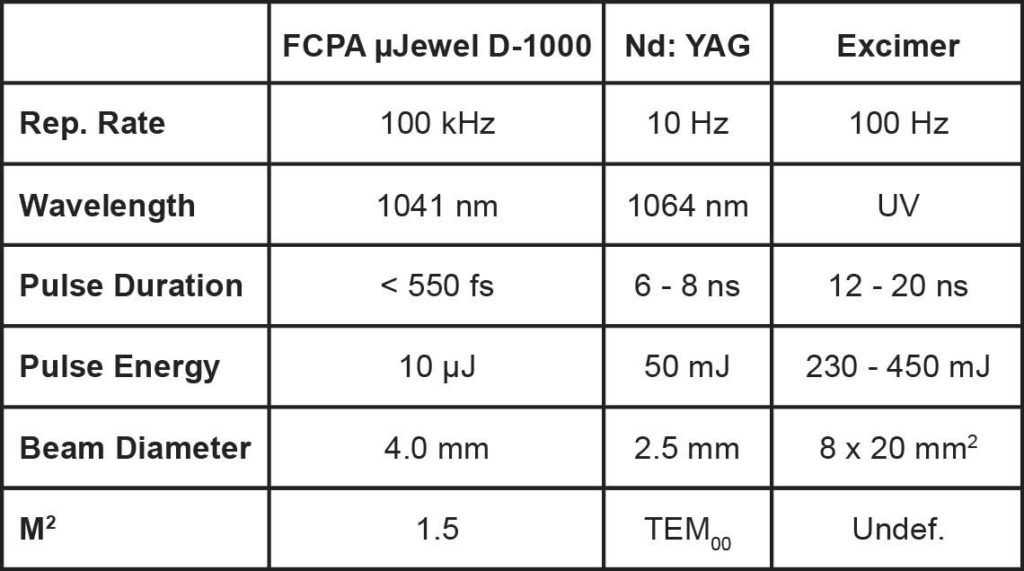 Below, we outline some examples of pulsed laser deposition applications which touch a number of important technology areas as diverse as electronics and automotive manufacturing.

Example 1: Thin Film Deposition
Thin coatings (on the order of nanometers to micrometers in thickness) are used for various functions in many industrial applications. They can improve surface hardness by providing a “hard-coat” to metals and composites. They can also be used to improve transmission through optical substrates or in the production of new and novel devices by allowing for creation of layers of materials for devices such as MEMS.

It has been demonstrated that Pulsed Laser Deposition has significant advantages over other film deposition techniques, including a simpler set-up, higher deposition rates (in nm/min), less contamination, and stoichiometric transfer of material from target to film. However, PLD employing nanosecond pulsed laser has some drawbacks. The most challenging issue is the formation of particulates or droplets of up to 10 μm diameter on film surfaces, due to splashing of the molten surface layer.

Recent reports3,4 show that using femtosecond fiber lasers could be a solution to eliminate the droplets problem while also providing other benefits such as less target damage, lower ablation thresholds, and beneficial ablation attributes such as highly ionized plasma. Repetition rates in the MHz regime enable the growth of good quality films with high deposition rates,5 while the fiber-based design of these lasers makes them extremely stable and suitable for use in harsh environments.

Example 2: Nanoparticle Generation
Some applications, such as optical quantum dots or magnetic memory, require the specialized properties of materials that have been produced at a size below 1 µm. Forced nucleation of laser-induced vapor in inert gases has been widely used to generate small metal6 and semiconductor7,8 particles in the past decades. These “nanoparticles,” which have many unique chemical and physical properties due to their small size, can be formed by several different chemical and physical techniques.

However, it is still a big challenge to synthesize and coat size-selected, uniformly dispersed nanoparticles efficiently and with a high purity. Femtosecond laser ablation has been suggested as a new method for nanoparticle generation9-11 due to the well-defined ablation threshold and atomization threshold of femtosecond material ablation.

In one study,12 it was shown that femtosecond laser ablation provides a one-step physical method for nanoparticle generation at room temperature. By controlling the laser fluence and supplying different background gases, nanoparticles of various materials can be generated and coated onto substrate with a desirable size distribution, crystallinity, and chemical composition. Figure 5 shows the more uniform particle size distribution of femtosecond PLD compared to nanosecond PLD.

Efficient processes to create nanoparticles are needed to realize the special properties of nanoparticles in industrial applications. The use of a femtosecond laser provides for pulsed laser nanoparticle generation that can be done in the same format as PLD but generally with lower laser fluence to produce particles instead of creating coatings.

Summary
Femtosecond laser pulses have demonstrated advantages over longer, nanosecond pulses for many material processing techniques. The laser energy can be deposited rapidly, and localized to the irradiated area without thermal diffusion to neighboring areas, resulting in very clean ablation and precise, controllable material removal. It also allows tighter control of particle size when compared with the use of nanosecond lasers, while high repetition rate femtosecond fiber laser systems allow increased speed of these processes. Because of these advantages, femtosecond fiber lasers are poised to become the preferred lasers for pulsed laser deposition applications such as thin films or nanoparticles on temperature sensitive substrates such as glass, paper or polymers, and industry-critical processes such as patterning of low-k dielectrics on semiconductors.