It is these advantages which explain why multi-photon LSM is enjoying growing popularity among researchers in biology, medicine, and neuroscience.  Here, we describe two important varieties of nonlinear microscopy:  two-photon microscopy, and third-harmonic generation (THG) imaging.  We show images using these techniques with various types of mode-locked fiber lasers.

Two-Photon Microscopy
Two-photon microscopy is based on a multi-photon process in which two photons of similar wavelength are simultaneously absorbed by a molecule which normally has absorption at half the wavelength of the two photons used.  The molecule then loses its excitation and emits another photon at a lower frequency (longer wavelength) than the sum of the frequencies of the original absorbed photons.

The coefficient for two-photon absorption is quite small, requiring high peak power and a tight focus to drive the process.   It also results in highly localized excitation in the focal spot waist of the beam, which gives the technique its inherent sectioning ability. 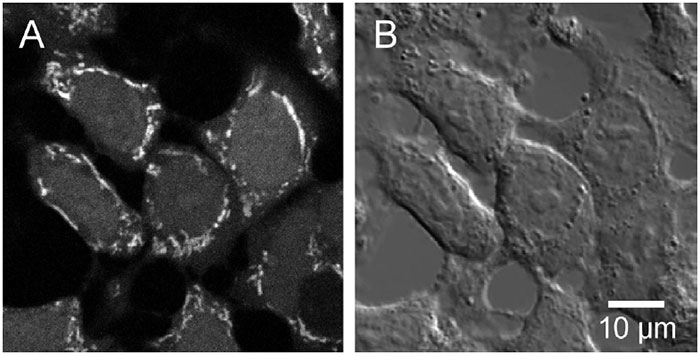 Ti:Sapphire lasers are the most popular source for two-photon microscopy, due to their tunability (700-950 nm) and high average power (~1 Watt).  However, there are numerous applications which do not require either the tunability or the power.  In fact, the amount of optical power on-target at the sample should be less than 10 mW. Any higher power can damage the sample and/or reduce its lifetime.   The higher powers of the lasers are used to compensate the optical losses in the microscope system, whose optics are usually optimized for the visible wavelengths, as opposed to the NIR excitation wavelengths.   Additionally, a large number of fluorophores are available which provide a variety of functional imaging options, even at a single wavelength.

Figure 2 shows Differential Interference Contrast (DIC) and two-photon fluorescence images of HT29 (human colon carcinoma) cells taken in 1998 using an IMRA Femtolite A-15 femtosecond fiber laser.1  The cells were stained with Indo-1 to reveal Calcium ion concentration and activity.  Images of other organisms have also been obtained without staining via their natural auto-fluorescence.  The stereoscopic image in Figure 1 was constructed from 40 sections taken with the same two-photon LSM system, also powered by the Femtolite A-15.  One of the first commercially available femtosecond fiber lasers, the Femtolite A-15 provided 15 mW average power at 780 nm with a pulse duration of 200 fs.  Recent IMRA products provide much improved performance in robust, compact packages.  For example, the Femtolite FX-100i provides over 100 mW average power at 805 nm, with a footprint size of only 14 x 10 cm.2

Figure 3: Schematic of THG microscopy system. Sample is set up in transmission geometry. Optical filter after the sample eliminates the pump light and passes the THG signal light.

An exciting new development in multi-photon microscopy has been the demonstration of Third Harmonic Generation (THG) microscopy.2   In this technique, laser pulses incident on a specimen generate third harmonic radiation.  This process is normally not allowed in bulk, isotropic media due to symmetry considerations. However, it is well known that the symmetry is broken at surfaces between dissimilar media, allowing the generation of harmonic radiation.  Thus, under intense illumination from a laser, the maximum emission takes place at interfaces, which are often the most interesting features.  Figure 3 shows the basic optical system, using laser illumination through the sample.  Because the THG light is generated in transmission, the sample geometry is set up to re-collimate the THG light and send it to the imaging camera.  As with two-photon imaging, this technique provides sectioning capability.   Figure 4 shows sectioned images of leaf cells taken in third harmonic generation using excitation pulses at 1560 nm, from a Femtolite model B-35.  Unlike fluorescence imaging, THG imaging requires no staining with dyes, so photo-bleaching can be eliminated, allowing researchers to view specimens for several hours at a time. 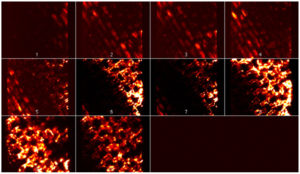 Another wavelength region of great interest is the 1000- 1100 nm range.   Compared with typical Ti:Sapphire wavelengths in the 700-900 nm range, these longer wavelengths fall in a window of higher transmission, and they are also scattered less, thus giving a better window into a number of different types of tissues.   IMRA’s Ytterbium-doped FCPA µJewel D-400 femtosecond fiber laser provides 400 mW average power at 1041 nm, making it a highly suitable source for this type of microscopy.

*This is an application note only; IMRA no longer manufactures the Femtolite FX-100i or the Femtolite Ultra fiber lasers.  For a comparable product, please see our Femtolite F/G/H line.