INTRODUCTION
Lasers have been used for material processing since their inception.  The traditional mode of a laser’s operation is to run the system at a fixed pulse frequency, and focus the laser’s output to the surface of the material to be treated.  This mode of laser operation produces a certain machining speed and corresponding processing quality.  Efforts to improve both were important for widespread use and appeal.  Unfortunately, the simultaneous improvement of speed and quality is not straight forward.  For example, faster cuts often lead to poorer edge quality.

Femtosecond lasers, however, have been shown to significantly improve the quality of processing.  Additionally, over the last few years, processing speed has been shown to be significantly improved by deploying pulse bursting.  The burst concept is based on breaking up each pulse and distributing its energy to a tight cluster of pulses, which are delivered to the surface in rapid pulse bursts.  In this paper, we illustrate that femtosecond bursting could be applied successfully to the difficult problem of processing transparent hard materials, such as glass, sapphire and diamond.

To evaluate the advantage of bursting, a comparison is presented between ablation results for various modes of laser operation: single pulsing, GHz bursting, and regular bursting.  In this case, ‘single-pulsing’ refers to the case when the laser is operated at a fixed pulse repetition frequency.  A detailed comparison is carried out to answer two questions for each of these modes: (a) what is the ablation threshold, and (b) what is the rate of material removal?

We start with the comparison of ablation thresholds of individual pulses with pulse widths ranging from 300 fs to 3 ps.  Those are contrasted with regular fs pulse bursts of 20 ns pulse-to-pulse spacing, as well as GHz bursts with pulse spacing of 1.4 ns.  In addition, a variety of GHz milling results are performed and contrasted with single pulsing, as well as with 20 ns bursting, as the number of fs pulses in a burst is adjusted from 3 to 9, to 17 pulses per burst.

In the femtosecond regime, and in particular for transparent hard materials, the ablation process starts with a multiphoton absorption and the creation of free carriers in the conduction band.  If the number of free carriers is high enough, an avalanche ensues, followed by the breakup and the ablation of the material by coulomb propulsion.  This process is non-thermal in nature, and establishes an ablation threshold for the material at hand.  Typically, the remaining free carriers in the substrate transfer their energy to the lattice, and start the thermalization of the surface.  Consequently, material processing with femtosecond pulses also has a thermal component which may be manipulated to enhance ablation.  This is done by employing pulse bursting.

GHz bursting, where the spacing between pulses is reduced to about a ns is an attempt to obtain further enhancement of the rate of material removal, approaching those of longer-pulsed lasers, but at quality of machining traditionally obtained with fs-pulsed lasers.  Various materials are tested, although this study has been mostly focused on transparent hard materials.  Note that the inverse of 1 ns is 1 GHz; therefore, GHz bursting is used to name this special mode of laser operation.

EXPERIMENTAL CONFIGURATION
Two lasers are used to compare ablation results between GHz bursting, regular bursting, and traditional single pulsing.  The first laser is a GHz-seeded FCPA laser, and the second is a DE1050 laser system that is operated either at normal single pulsing mode or with 20 ns bursts.  Both lasers are designed and manufactured by IMRA America, Inc.

The GHz pulse to pulse spacing within a burst is set internally at 1.4 ns.  While in burst mode, the lasers are operated at either 3, 9, or 17 pulses per burst.  The choices of the number of pulses per burst (3, 9 and 17) were chosen arbitrarily and out of a desire to progressively compare ablation results with traditional bursting operation, and with single pulsing.  To ensure proper comparison, the delivered pulse or burst energies are maintained to be the same, the diameters of the focal spot is kept the same, and so fluence levels are maintained.

INSIGHT INTO ABLATION THRESHOLD
Single pulse ablation experiments are carried out so as to understand the basis for ablation conditions of more complex and higher power burst operations.  Towards this end, individual pulses/bursts are deposited on the working substrate and the ablation threshold is measured for each condition.  This is carried out by operating the lasers at lower frequencies, while scanning at higher speeds so as to eliminate the overlap between deposited pulses or bursts.

Figure 1 shows ablation crater diameters vs. pulse or burst fluences.  The intersection of the dashed lines with the horizontal axis represents the ablation thresholds for these various modes of operation. 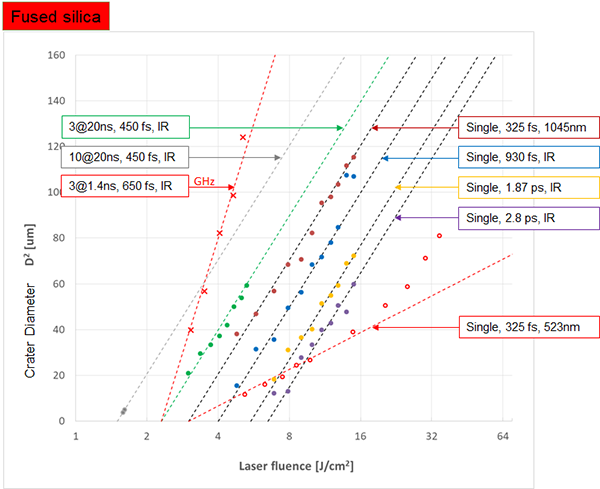 The first test takes advantage of the flexibility that the DE1050 laser offers to provide fs pulses that range in pulse widths from 300 fs to several picoseconds.  On the right hand side of Fig. 1 are listed various single-pulse cases, showing that ablation thresholds increase incrementally as pulse widths are increased from 325 fs, to 930 fs, 1.87 ps, and 2.8 ps.  This increase of the ablation threshold is most likely due to the reduced efficiency of multiphoton absorption and subsequent reduction in free carrier generation as the pulse peak power is reduced with the increase of pulse width.

Figure 1 also compares the single pulse ablation threshold with that of individual bursts.  In this case, burst crater diameters are charted for 20 ns bursts and 1.4 ns individual bursts for fused silica.  Note that the crater diameters measured here is the aggregate diameter for the entire burst, while the fluence level used for the horizontal axis is the total burst fluence divided by the number of pulses in that burst.  This result supports the notion that multipulse damage threshold is lower than that for a single pulse, i.e. a series of pulses of lower energy are likely to produce surface damage at a fluence level lower than the damage threshold of a single pulse.  In this case, it is interesting to see that the horizontal axis intersection for the 10-pulse burst is less than that for 3-pulse, which is less than that for a single pulse.  Also, it is interesting to see that for fused silica, the effective damage threshold for 3-pulse GHz burst is similar to that of 3-pulse 20 ns burst.

Additionally, as shown in Fig. 1, the single pulse ablation threshold for the second harmonic pulse at 523nm is measured.  Note that the intersection with the horizontal axis is similar to that of the fundamental.

MACHINING WITH BURSTS
More ablation comparisons are done to test the rate of material removal while the lasers are operated in continuous stream to mill a variety of materials.  In addition to single pulsing, GHz bursting at 1.4 ns, and 20 ns bursting, all at 100 kHz, a fourth mode is added to illustrate the extreme case of bursting whereby the optical pulses are delivered evenly in time.  Those various modes are shown schematically in Fig. 2.  The materials used (and their respective thermal conductivities, W/mK) are (a) borosilicate glass, 1.14, (b) fused silica, 1.38, (c) sapphire, 40, (d) monocrystalline silicon, 149, (e) aluminum, 205, and (f) CVD diamond, 2000 W/mK.

The four modes of laser operation shown in Fig. 2 are used to illustrate the advantage of bursting in accelerating material removal and machining.  Those rates are shown in Fig. 3 for three very different materials: fused silica, diamond and aluminum.  The case of the 300 kHz single pulse mode of operation is particularly interesting because it corresponds to the case where peak powers are similar to those in a burst, but the delay in energy deposition allows for maximum diffusion of the residual heat from the crater to the substrate.  This condition also eliminates the negative effects of cloud shielding.

As shown in Fig. 3, we see that performance of GHz bursting is similar to that of 20 ns bursting for fused silica glass at scan speeds above 250 mm/s.  At scan speeds below 120 mm/s, we see reduced efficiency of material removal, most likely due to cloud shielding and the significant amount of debris ejected from the surface.  In particular, we note that single pulsing at below 150 mm/s enjoys incrementally increasing material removal efficiency.  This is due to the 10 msec delay between adjacent pulses, as compared to the 1.4 ns and 20 ns found within bursts. 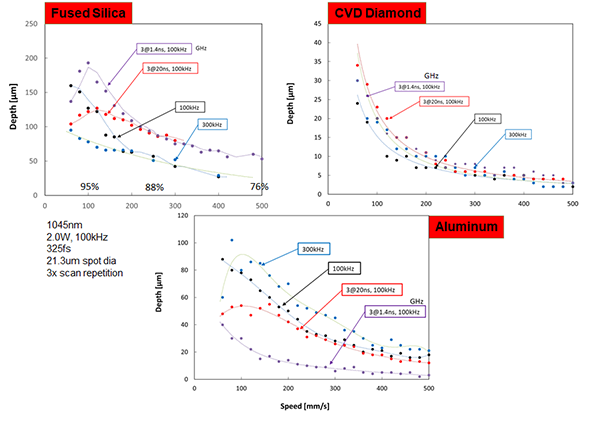 Fig. 3. Ablation depth results for various milling operations of fused silica, CVD diamond, and aluminum. All cases are for three-pulse burst operations, correlated with single pulsing. These results show that GHz bursting has limited advantage for fused silica, neutral performance for diamond, and negative advantage for aluminum. The scan speeds of 100, 250, and 500 mm/s correspond to pulse to pulse overlap ratios of 95, 88, and 76%, respectively.

Diamond is significantly different from fused silica.  The most noted difference is that thermal conductivity for diamond is 1500 higher.  This accelerates heat diffusion into the substrate and negates the effects of enhanced heat accumulation on bursting.  So ablation, in this case, depends on coulomb propulsion without thermal ablative enhancement.  Consequently, the amount of material removal and milling depths shown in Fig. 3 for diamond is much less than that for fused silica for the same amount of deposited energy.

Figure 3 also shows that single pulsing produces deeper milling results of bulk aluminum as compared with burst mode operation at similar average power levels and frequency.  In particular, the more heat is allowed to diffuse into the substrate, the deeper the milling results.  This concludes that the 300 kHz single pulse mode, which corresponds to the condition of maximum thermal diffusion into the substrate, enjoys a slightly better performance than the other modes of operation.  This advantage seems to be visible for scan speeds above 120 mm/s.  At lower speeds than that, we see a reduction in the milling efficiency, possibly due to cloud shielding.

It should be pointed out that the efficiency of material removal by bursting is directly affected by the kinetic energy of ejected particles.  This issue is noticeable and affects GHz bursting directly, particularly when cloud shielding comes into play.  For example, by the time the next pulse of a GHz pulse sequence arrives to the surface, the cloud of ejected material by the previous pulse is only a few microns above the surface and has not had the time to disperse.  This pulse will then encounter more shielding effects which leads to reduced efficiency.  Those effects will counter the benefits of residual heat that supports ablation by material dispersal, such as by a shock wave generated by coulomb ablation.

The above tests are repeated and extended to 9-pulse and 17-pulse burst formats, for 1.4 ns (GHz) and 20 ns bursts.  Those results are not included here, but are published [Ref. 1].  Those also include comparisons for borosilicate glass, diamond and monocrystalline silicon.

CONCLUSION
Bursting has been applied successfully to a variety of machining operations using lasers that range in pulse widths from ns to fs.  Generally, the shorter the pulse (such as fs) the better is the quality of operation.  To augment the machining process, both GHz and regular bursting formats could be incorporated in fs lasers.  The optimum performance of any laser’s mode of operation, however, depends on the intended final quality of machining.  As is often the case, a high rate of material removal may not produce attractive results, driving interest for alternate formats and higher peak powers, such as GHz fs bursting.  This pulse burst format has the advantage of tailoring the distributed energy so as to balance the rate of material removal with the desired surface roughness after the completion of the machining operation.